Here is our second section dedicated to filtration. This month we’ll be dealing with removing oil in liquid and vapor form. Two different techniques are used:

Coalescence is the phenomenon by which 2 droplets of a liquid come together to form a larger droplet.

This phenomenon is often seen in a kitchen when humid, warm air comes in contact with the cold glass pane. First, condensation appears (very fine droplets), which coalesce together to form increasingly large and visible droplets.

When their weight is large enough they unhook from their support, run down the glass and then fall to the ground.

The role of an oil separator element is to cause and promote the coalescence of the oil mists present in the compressed air so that, having formed sufficiently large drops, these drop by gravity into the bottom of the filter and are eliminated by the purge system.

Coalescence can do nothing for oil vapors for which the coalescing element is "transparent". Vapors can only be captured by adsorption on a microporous material.

The most widely used product is undoubtedly activated charcoal. The latter will attract and capture the oil vapors inside billions of microscopic pores. The lifespan of such an element is linked to the quantity of carbon present in the media as well as to the temperature of the compressed air. The lower the temperature, the lower the amount of oil in the vapor phase.

For large installations, the columns of activated carbon advantageously replace the cartridge filters by providing a larger volume of carbon and therefore a much longer operation between 2 maintenance interventions. 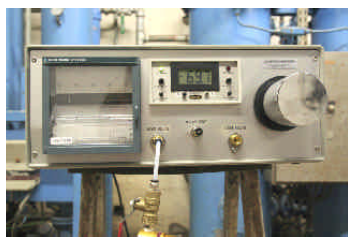